The Mixed Up Blog — Korean Today we celebrated the Korean harvest festival of Chuseok (Korean: 추석) in my kid's Korean Immersion elementary class. Traditions are very important in our home. I am mixed Latina and Black and my husband is Korean so being a multicultural family and raising our children as mini global citizens to appreciate and celebrate their respective cultures is an invaluable gift we are passing on to them.

In all honesty, it is also a chance for me to learn more about my children's Korean culture. We learn from each other, right? So Chuseok  추석, also known as Korean Thanksgiving Day, is one of the most important and festive holidays of the year. Just like the American tradition of Thanksgiving, Koreans return to their ancestral hometowns to celebrate with their families to feast on traditional foods and rice wines.

The origins of Chuseok 추석 can be traced back to Korea’s past as an agrarian society. During that time period, families gathered to enjoy time together as well as give thanks to their ancestors for a good harvest.

Other customs include paying respect to ancestors by cleaning their graves and presenting foods to their spirits. 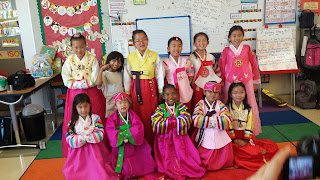 5 Ways To Teach Your Kids About Race & Cultural Diversity

It is time for parents to teach young people early on that in diversity there is beauty and there is strength.~Maya Angelou Last week I was asked to be on a local NPR station to talk about what it's like to be mixed-race in today's changing demographic. I love that question but even more, I love talking to parents about what they can do. Tangible things about how can we raise children who love who they are as well as raise socially-conscious children who embrace other races? I hear you saying, yes but aren't we all part of the human...

Mis hijos y sus abuelos It has been just over a month since my children’s haraboji  (grandfather in Korean) passed away after a long battle with cancer.  His passing brought up the tough question that has plagued many parents: How do you talk to your kids about death? Death is one of the hardest subjects to broach with young children, especially when you’re struggling to deal with your own sorrow. My 8-year-old reacted one way and my 5-year-old another. One became clingy, while the other was his usual cheerfulness. Our daily routine had been interrupted as days and nights would be spent...

5 Ways To Teach Your Kids About Race & Cultural Diversity
January 1, 2015